Senator Bernie Sanders would begin a 2020 presidential bid with 2.1 million online donors, a massive lead among low-dollar contributors that is roughly equivalent to the donor base of all the other Democratic hopefuls combined.

Beto O’Rourke, the former Texas congressman who narrowly lost a Senate race last year, is also poised to be a fund-raising phenom if he runs for president: He has twice as many online donors as anyone eyeing the race besides Mr. Sanders.

Three senators who are already running have their own solid track records with small donors. Senator Elizabeth Warren, with the third-highest number, has notable strength in New Hampshire, even topping Mr. O’Rourke there. Senator Kirsten Gillibrand has built up broad national support among small donors, despite a reputation as a big-money fund-raiser, while Senator Kamala Harris raised $1.5 million online in her first 24 hours as a presidential candidate.

Small-dollar donations are expected to be a huge deal in 2020 — the renewable resource that Democratic candidates will depend upon to fuel their campaigns. And those five Democrats represent a distinctive top tier with the most formidable followings, each counting a base of at least 230,000 online donors, according to a New York Times analysis of six years of federal election filings from ActBlue, the Democratic Party’s dominant donation-processing platform.

[Check out the 6 days when 2020 Democratic hopefuls scored big with small donors.]

The findings provide a window into one of the most closely guarded and coveted resources of a modern campaign: the digital donor lists that bring in the vast bulk of low-dollar donations. These online donations average just under $40, and candidates like to point to such modest amounts as evidence of the breadth and depth of their support among regular people.

In the early stages of a presidential race, when polling measures little more than name recognition, the relative size of donor networks can provide one of the best metrics of strength.

“The people who have a strong base right now have a material head start,” said Teddy Goff, who served as a top digital strategist for the campaigns of President Barack Obama in 2012 and Hillary Clinton in 2016. “And more often than not, there is a good reason they have that base, and it’s that they have a talent for connecting with the grass roots of our party.”

For Mr. Sanders and Mr. O’Rourke, the enormous early edge in their donor rolls has afforded them the flexibility to wait longer before deciding to jump in, and has sparked a sense of urgency in other campaigns. Both men have signaled they would rely overwhelmingly on small donors to fuel any campaign.

[Make sense of the people, issues and ideas shaping American politics with our newsletter.]

The particular power of Mr. Sanders’s list was on display in late December when he emailed supporters with the provocative subject line, “If I run.” That single email netted $299,000 from 11,000 donations, according to a senior Sanders official.

That is almost the exact amount that Ms. Warren raised on the day she announced she was entering the race, data shows.

The Times’s analysis estimated the size of the online donor armies for current and potential candidates by comparing hundreds of millions of dollars in donations processed through ActBlue. The analysis does not include candidates who have not run for federal office, such as mayors or governors, nor those who did not use ActBlue. 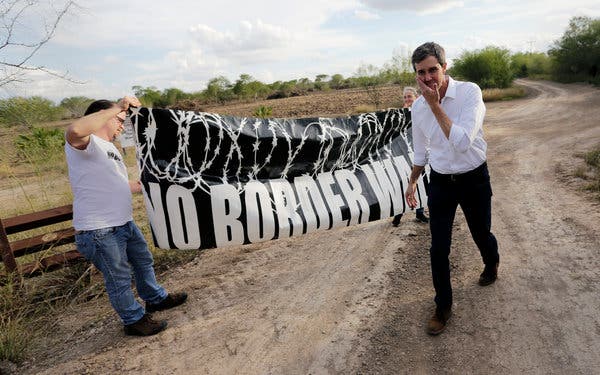 Senator Cory Booker of New Jersey, who entered the race at the start of February, would be Grand Forks, N.D. (56,000) — a sign of how Mr. Booker has not yet converted his vast social-media following into financial contributors.

Former Vice President Joseph R. Biden Jr., despite being nationally known, would probably also begin far behind because he has not run for office on his own in a decade. His political action committee reported about $925,000 in donations of less than $200 since mid-2017, but since Mr. Biden does not use ActBlue there is no estimate of his number of donors. A spokesman for Mr. Biden declined to comment.

[Check out the Democratic field with our candidate tracker.]

Mr. Biden does have one unusual asset: access to the Obama campaign’s vaunted email list, which was 9 million-strong when turned over to the Democratic National Committee in 2015, according to the party. But email lists rapidly atrophy, and one that is seven years old is seen as a relative relic.

Donors lists can take years to compile, and the biggest ones are often only developed through running a high-profile race. Email remains the dominant way to raise money online, and campaigns heavily advertise efforts like petition-signing drives on Facebook to harvest new donor email addresses. Those lists, in turn, generate volunteers and a network of potential supporters who can amplify candidates’ messages on social media to build further support.

Grass-roots giving is seen as so important in 2020 that the Democratic National Committee has included it as part of its presidential debate qualification rules. Reports nytimes

Cop Fired for Cowering in Fear as Gunman Slaughtered Children Gets Rehired, with Full Back Pay