Supreme Court Justice Ruth Bader Ginsburg, the oldest, tiniest, and possibly the most well-known justice, returns to her perch on the Supreme Court bench Tuesday.

The 85-year-old liberal feminist icon underwent surgery for lung cancer in late December, and since then has been recovering at home. In January, for the first time in her 25-year tenure, she missed being in court for oral arguments, but participated in the decision of those 11 cases, based on the written briefs and transcripts of the arguments.

As luck would have it, after the January arguments, the court had scheduled a month-long “writing break,” allowing Ginsburg extra time to recuperate from home. Last Friday, Ginsburg returned to the Supreme Court building for the first time in order to participate in the justices’ private conference, the first such conference scheduled since mid-January.

Ginsburg has been working hard to regain her strength. Friends say she is walking more than a mile a day and is once again working with her trainer twice a week.

Tuesday, all eyes will be on her, but the diminutive justice can be hard to see behind the tall structure that towers above those mere mortals in the courtroom who are not up there on “the bench.” Indeed, she is so tiny that spectators often can hear her voice but can just see the top of “The Notorious RBG’s” head. 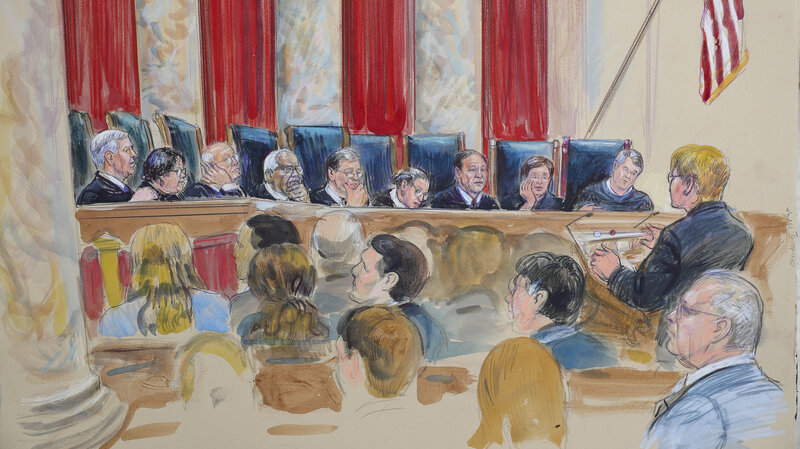 Justice Ruth Bader Ginsburg, sketched here with the rest of the Supreme Court last year, worked from home on the cases the court heard in January. On Tuesday, she returns to the bench.

Doctors at Memorial Sloan Kettering Cancer Center operated on Ginsburg Dec. 21, removing one of the five lobes of her lungs. Days later she returned to Washington, D.C., to recuperate. Doctors reported that the pathology report on her lung found no further evidence of disease and they said no further treatment is planned.

While this is Ginsburg’s third bout with cancer in 20 years, statistics indicate that patients with a lung cancer found early, as this one was, have a recovery rate of 70 to 80 percent. Ginsburg’s cancer was found incidentally, when doctors noticed an abnormality in CT scans taken after she fell and fractured her ribs last November.

Ginsburg has made no secret of her desire to serve on the nation’s highest court until someone more to her liking, not President Trump, is in the White House. She has no plans to retire any time soon. But she is 85 years old, and she can see the current Supreme Court moving decidedly to the right.

The hard-right ideological turn is taking place in the wake of Justice Anthony Kennedy’s retirement last summer. Kennedy, a centrist conservative, often cast the deciding vote in closely divided cases. He was replaced by Brett Kavanaugh, a far more conservative judge, and the second Trump appointee to the court. That single appointment means that conservatives now occupy five of the nine seats on the Supreme Court; any further vacancy among the court’s four liberals would mean not a 5-to-4 conservative majority, but a 6-to-3 majority. In other words, room to lose one vote and still prevail in any given case.

Conservatives at the Federalist Society and the Heritage Foundation have been planning and hoping for this ideological turn for decades.

Indeed, Washington legal circles are rife with rumors these days that Justice Clarence Thomas, the court’s most conservative member, is pondering retirement, the theory being that were he to retire, Trump could nominate someone in his or her 40s to replace the 70-year-old Thomas, thus guaranteeing a longer-term grip on the Supreme Court seat Thomas now occupies. Trump has in fact hosted Thomas and his wife for dinner at the White House, and met with Ginni Thomas and some of her conservative activist friends. Press reports of that meeting indicate that the president seemed surprised by some of the ideas espoused by some in Ginni Thomas’ group, including the notion that women are not qualified to serve in the military.

Trump may hold some unorthodox political views, but he clearly understands that the people he places on the nation’s federal courts, not just the Supreme Court, will have an impact that lasts far longer than his presidency. He has achieved a record-high number of appointments to the federal appeals courts, the courts that rank just below the Supreme Court. He has appointed 30 of those judges, more than any other president at this point in his first term of office. Reports NPR

Court shuts down challenge of Mueller, rules appointment as special counsel was lawful

Mueller Probe Is The ‘Single Most Serious Investigation’ In U.S. History

WATCH: Trump met witch chants of ‘Vote Him Out’ as he pays respects to Ruth Bader Ginsburg

President Trump and First Lady Melania Trump were met with loud chants of protest as they paid respects to the late Justice Ruth Bader Ginsburg at the Supreme Court...
Read more

The Women’s March organization is planning a nationwide protest next month opposing President Trump and his move to fill the late Justice Ruth Bader Ginsburg’s seat on the Supreme...
Read more

Cop Fired for Cowering in Fear as Gunman Slaughtered Children Gets Rehired, with Full Back Pay

Parkland, FL — A sheriff’s deputy who was fired after the Marjory Stoneman Douglas High School shooting for cowering by his car while Nicolas...
Read more

Donald Trump Jr hints he could run for president in 2024

Donald Trump Jr has hinted he could run for president in 2024. The incumbent US leader’s eldest son posted an Instagram story showing another user mentioning...
Read more

We have no idea why Trump believed he needed to have another press conference today. One wasn’t originally scheduled. We can only guess that...
Read more